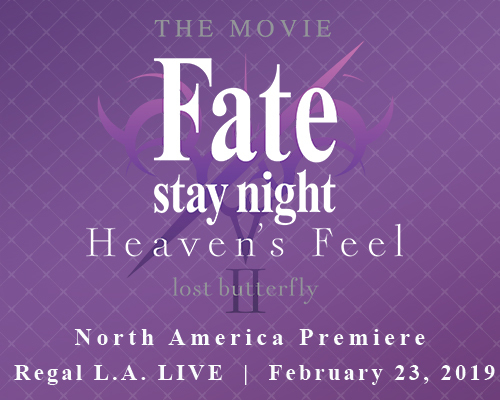 For one day only, the second chapter of the trilogy unfolds with not one, but two screenings!

SANTA MONICA, CA (January 15, 2019) – Aniplex of America is proud to present the North America premiere of Fate/stay night [Heaven's Feel] THE MOVIE II. lost butterfly on Saturday February 23, 2019 at the Regal L.A. LIVE located in downtown Los Angeles. Fans will have two chances to catch the film with an 11 AM (PST) and 2:30 PM (PST) screening, which will include a special giveaway and a yet to be announced special guest. Ticket sales for the Los Angeles premiere will begin January 17 at 11 AM (PST) on www.fatestaynightusa.com/ticket, followed by a nationwide release on March 14 distributed by Fathom Events. Tickets for the nationwide release will go on sale January 25 – details on where to purchase coming soon.

Fate/stay night [Heaven's Feel] THE MOVIE II. lost butterfly is the latest installment of the beloved series from the creators of the wildly popular Fate franchise that gave anime fans Fate/stay night [Unlimited Blade Works], Fate/Zero, Fate/Apocrypha, and the hit mobile game, Fate/Grand Order. This three-part movie follows the third route, known as the “Sakura Route,” of the Fate/stay night visual novel game, with the first chapter of the Heaven’s Feel trilogy, I. presage flower, released in 2017 to much fanfare. The film summons the all-star cast of Ayako Kawasumi, Noriaki Sugiyama, Junichi Suwabe, Hiroshi Kamiya, and Noriko Shitaya as the heroine Sakura Matou. Celebrated animation studio ufotable (Fate/Zero, Fate/stay night [Unlimited Blade Works], the Garden of sinners) returns to produce the film under the direction of Tomonori Sudo (the Garden of sinners/recalled out summer). Renowned composer Yuki Kajiura, whose work on Puella Magi Madoka Magica and Sword Art Online garnered critical acclaim, lends her musical talent to provide the soundtrack for the film. In November 2018, Japanese rising songstress, Aimer, revealed the title of the theme song for the film, “I beg you,” at the Fate/stay night [Heaven’s Feel] Special Event presented by Aniplex of America, Sony Music Entertainment Japan and Anime NYC.

In their review of Fate/stay night [Heaven's Feel] THE MOVIE II. lost butterfly, Anime News Network writes that the latest film “is even better than the first film,” noting that “presage flower spent a lot of time building up a sense of atmosphere and a foreboding that something is not right, and lost butterfly capitalizes on all of that, delivering an emotional rollercoaster that left me itching to see how the finale plays out.”

For more information, please visit the official website: https://www.fatestaynightusa.com/
About Fate/stay night [Heaven's Feel] THE MOVIE II. lost butterfly:
“The opponent I must fight still remains in this town.”
The boy made a decision to keep fighting and to protect the girl.
The Holy Grail War, where Masters and Servants fight to claim the Holy Grail. A new war has started again in Fuyuki City, 10 years after the previous Grail War. However, due to the participation of Zouken Matou, the patriarch of one of the Founding Three Families in the Holy Grail War, things begin distorting, twisting, and growing worse.

Zouken summons the Servant, True Assassin.
An unknown shadow covers the city, killing Masters and Servants one by one.

Shirou Emiya, who has been fighting as a Master in the war, gets injured, losing his Servant, Saber. With his firm decision to protect Sakura Matou, Shirou refuses to leave the battle. While Sakura worries about Shirou, she also gets entangled in her own fate as a mage.

“I promise. I’ll – “
He decided he wouldn’t betray her.
However, their fervent wishes are about to be crushed by the black shadow soon…