The Heaven's Feel Cast Members Come Together at
the Fate/Grand Order Fes. 2017

Find out some highlights of the new movie according to Shirou, Sakura, and Saber! 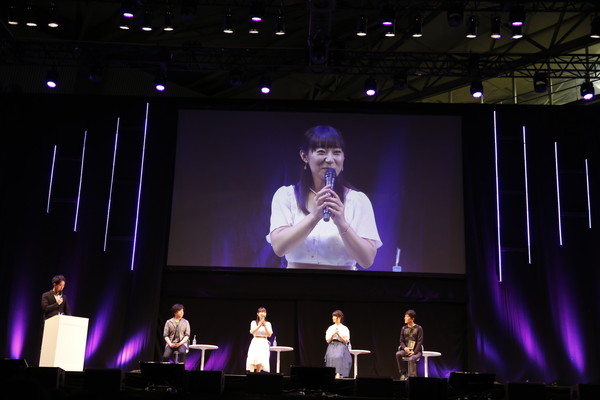 “Masters of Chaldea, welcome to the Fate/Grand Order Two Year Anniversary Event. Are you all enjoying the festival? Heh, fine. What we’re announcing now is something premiering on October 14th, premiering on October 14th, I had to say it twice because it’s that important. This is the special stage event for the theatrical release of Fate/stay night –Heaven’s Feel-. Are you all ready to get hyped? Great. Let’s begin. Hope you enjoy to your heart’s content.”

Fate/Grand Order Festival 2017 took place in Makuhari Messe, and the venue is filled with cheers from the audience. The Heaven’s Feel event opens up with the voice of Kotomine Kirei, no, Jouji Nakata, narrating. Then, the host invites the cast members on to the stage.

As each of the cast members greeted the audience with their most famous quotes, the crowd broke out in uproarious applause.

“This is amazing, so many fans have gathered here, that we can’t even see those in the back from the stage anymore. Thank you all so much for coming!” says Mr. Sugiyama. Both the standing section and the floor were so packed that not a single seat was available in the audience.

The first segment was “Heaven’s Talk,” where the cast discussed what Heaven’s Feel is all about. Each of the cast members shared the scenes that they were most excited about. Because they had already finished recording for the first movie, they were still very much passionate about the project as they shared their favorite scene, from what we can only guess is from the first movie. 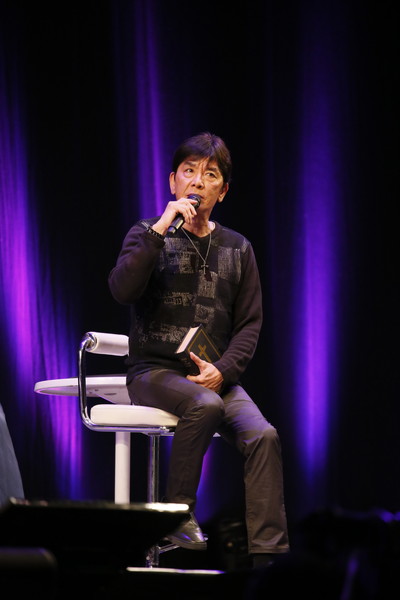 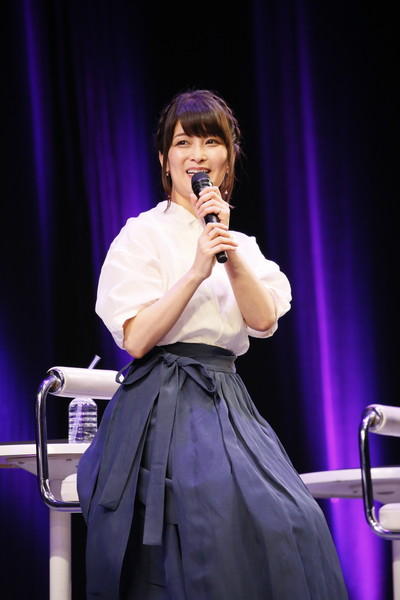 ●Jouji Nakata：Lancer’s battle scene
Nakata: “This was a really hard question for me because there are so many memorable scenes. I suggested Sakura-chan’s E cup, but that was vetoed (laugh). As you know, Lancer from the Fate series is a pitiful man. I mean, I (as Kotomine) may be partially responsible for this (laugh). I believe there are a lot of you that are looking forward to seeing what kind role Lancer plays this time, so Director (Tomonori) Sudou has prepared for you all Lancer fans, a fierce, intense battle scene. You’ve probably already seen in the PV, but Lancer was fighting on top of a car, but falls and dies…wait, what? No, he did not die! A servant would not die just from that (laugh). Please look forward to seeing more scene with Lancer, including that one.”

●Ayako Kawasumi：Cooking Scene with Sakura and Shirou
Kawasumi: “I was also struggling to choose from several different scenes, including battle scenes, but the cooking scene represents Sakura’s happiest moments. To protect this moment, Sakura must... this desire is the theme of the film. (In this theatrical release) This happy scene is drawn out with such care, that it’s a truly beautiful, clean, and such a pleasant scene. It’s almost as if all that matters is Sakura’s happiness… After the recording was very memorable too. I was talking with Nori-chan (Noriko Shitaya), how amazing Sakura’s smile can be.” Shitaya: “Just as Ms. Kawasumi has just mentioned, that’s the base. Further down the story, this scene is the key to answering ‘why things turned out the way they did,’ so I played this happy scene just as happily.” Sugiyama: “This slice of life scene from Emiya’s pleasant household is very unique within the Fate series. This key scene is depicted so clearly. That’s why this scene is also so bittersweet….” 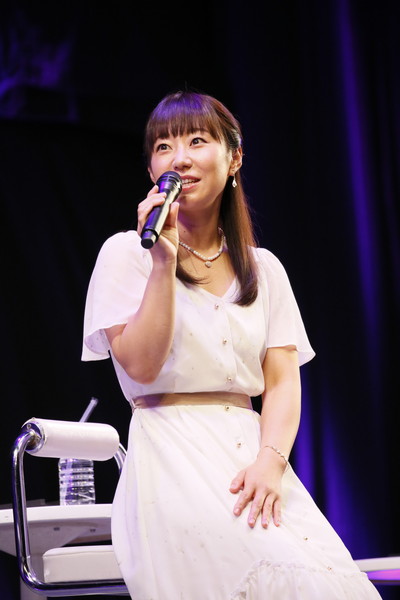 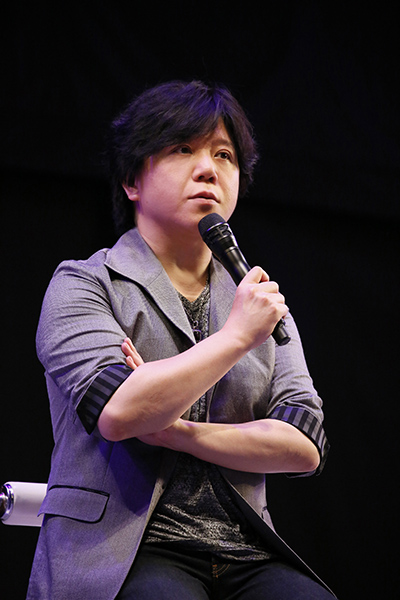 ●Shitaya Noriko: Storehouse Scene
Shitaya: At the event in 2014 where we announced “Heaven’s Feel” and showed the PV, there was a scene where Sakura asks Shirou “If I became a bad person would you scold me, Senpai?” This scene happens in the storehouse of the Emiya house! To me, it is one of the most memorable scenes.

●Noriaki Sugiyama: Shirou and Kotomine’s Conversation Scene
Sugiyama: Within the Fate series, since Kotomine acts as a catalyst in moving the story along, there are many scenes where you see Kotomine and Shirou in a heated discussion. There’s one scene in particular of the two of them that made me go “Oh! That’s Fate!!” When I saw the video (test video) for rehearsal before the recording session, it made me extremely happy. I can’t say too much because we haven’t shown the film yet, but there is a scene I’m looking forward to everyone seeing.

Nakata: I’ve had the pleasure of acting in many scenes with Shirou, but each time feels like a unique experience. During my recording session with Mr. Sugiyama for this film, I kept asking him “Can we please do it one more time?” Towards the latter half of the film, there is an interaction between these two that you have never seen before, so please look forward to that part as well.

At that point, an updated PV provided by ufotable, who is currently in production of the film, is shown to the audience. The stylistic action scenes was displayed on the oversized monitor serving as the backdrop of the stage.

Shitaya: I was curious to see how that Lancer fighting scene that Mr. Nakata mentioned would turn out during the recording session, but seeing the completed work was truly spectacular. There are a lot of fighting scenes with each servant and Sakura’s emotional state is really beautifully illustrated. I can’t wait for everyone to see it!

In the next segment (titled “Heaven’s Museum”), we asked the cast to draw their own version of the key visual for “Heaven’s Feel,” ahead of its upcoming release. Each illustration was a masterpiece in its own right and the love the cast had for the series was evident in their work of art.
Following the presentation, we unveiled the new key visual by Original Character Designer, Mr. Takashi Takeuchi.

Shitaya: Finally! Sakura gets the center spot! (laugh) And a lot of the characters that serve as key person is featured on it too! This is also the first time Ojii-sama (Zouken Matou) is on the key visual too. I’m really happy about that. 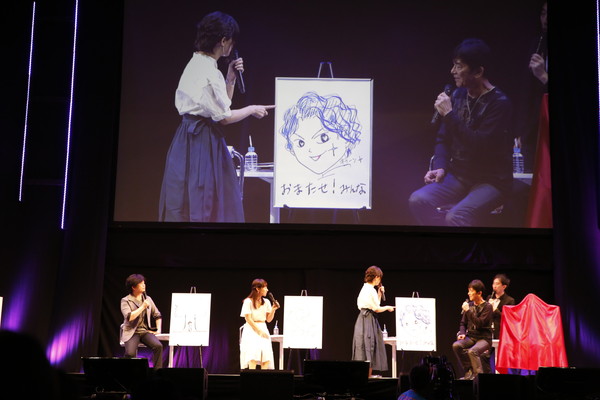 At the end of the event, we asked the cast for any final comments.
Nakata: Last night, I decided to re-read the “Heaven’s Feel” script and it took me close to 2 hours. It made me realize how robust the story is. You can really tell that Director Sudou, who directed Garden of Sinners: Future Gospel and served as the Character Design and Episode Director for Episode 5 of Fate/Zero, genuinely worked hard to make this a great film, along with everyone at ufotable. You know how powerful the PV sounded when we just watched it? I get goosebumps when Mr. Yuki Kajiura’s music hits that up tempo beat. I can’t wait for everyone to enjoy “Heaven’s Feel” in a theater, on the big screen, with surround sound.
Kawasumi: It feels like just yesterday when we announced the theatrical release of “Heaven’s Feel” in 2014. When we were recording, it was still really cold outside but we were very passionate and full of emotion. Nori-chan’s (Shitaya) Sakura made it seem like the real Sakura was there with us. It made me feel like “it’s finally happening.” From “Fate/Zero” to “Fate/stay night [Unlimited Blade Works],” we were able to see Kiritsugu’s dream of becoming the “Hero of Justice” carried on by Shirou; but I feel like “Heaven’s Feel” takes on a different shape. I am really looking forward to people watching the final chapter of “Fate/stay night” and I hope everyone takes the opportunity to watch it in theaters.
Sugiyama: I know that many people, including the staff and myself, have been looking forward to the Sakura route of “Fate/stay night.” We’ve been done with recording for a while now, so seeing the PV today, I was blown away by the CG and production value. I can’t wait to see it in the theaters. I urge everyone to see it in the theaters not just once, but twice, three times!
The Fate series keeps expanding
Shitaya: We still have 77 days until the premiere, but I know the day is going to come before we know it. Since we are done with recording, we just have to patiently wait for the film to be completed. I believe the original “Heaven’s Feel” game is a very long story. At first, I didn’t know how they would be able to organize all three chapters, but after reading the script for the first chapter, I thought “Everything’s going to be ok” and it made me think that this is going to be an incredible trilogy. I can say with certainty that we are delivering to everyone an exceptional piece of work. Please just wait 77 more days. We’re also doing an internet radio show, so we plan on keeping the hype up all the way up to the premiere!
Thank you so much for today!